Home » About Us » Company Story

Mike Kane founded Kane Manufacturing in 1969 and grew it into a leading national manufacturer of farm equipment serving customers in North America and in over 40 countries around the world.

In 2016, Kane Manufacturing was acquired by an affiliate of Lee Container Corporation (a leading manufacturer of plastic containers headquartered in Homerville, Georgia). Following this acquisition, Lee Container’s president Robert Varnedoe became President of Kane Manufacturing and Mike Kane stayed with the company as a consultant.  Mike Kane passed away in April 2017 at the age of 79. 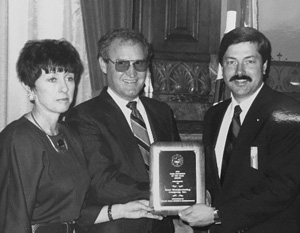 Donna Kane and Mike Kane receiving the Iowa Exporter of the Year award for 1991 from Iowa Governor Terry Branstad.

The company continues to operate under the name Kane Manufacturing and serves its customers from its headquarters in Pleasant Hill, Iowa with Kane’s experienced staff.